Ichiba combines an array of food stations with retail space for Japanese culinary staples, sweets and treats, kitchenware and ceramics, sake, books and beauty products. All in all, 3000 Japanese products are reportedly on sale!

Diners can choose between a noodle bar, sushi and a yakitori counter as well as stations selling other classics like Japanese curry and takoyaki. Increasingly trendy hirata buns also make an appearance. The setup, with central seating space, is convenient for groups who want to enjoy a range of Japanese foods.

Many of the options are reasonably priced. For example, £8.80 for a Pork Katsu Curry or £7.90 for a Prawn Tempura Donburi.

A fishmonger and butcher also sell sushi-grade fish and cuts of meat common in Japan but difficult to find in the UK (sliced pork belly anyone?). Fresh vegetables are also on offer in distinctively Japanese styles. The site of half a hakusai cabbage or a quarter pumpkin wrapped in cling film on a plastic white tray will prove strangely evocative to all those who’ve lived in Japan.

Ichiba is a four-way collaboration between the following partners: sake and umeshu brewery Gekkeikan; condiment maker Kikkoman; the Cool Japan Fund, which is backed by the Japanese government; and the Japan Centre Group.

Certainly, in many ways Ichiba resembles a larger version of Japan Centre’s flagship store off Leicester Square, albeit in a very difference space: part of the new £600m Westfield Square expansion, the almost hangar-like space is full of light and is broken up by creative uses of Japanese paper, flags and fabrics. The inner workings of all the kitchens can be seen and there is seating space for 200.

Cooking demonstrations and workshops, sake tastings and rolling showcases of regional food aim to keep Ichiba an interactive space rather than just an eating and shopping destination.

At the opening party, Japan Centre and Shoryu Ramen CEO Tak Tokumine described the growth of Japan Centre in the 42 years since he settled in the UK in 1976 as a miracle. Japanese Ambassador to the UK Koji Tsuruoka described the opening of Ichiba as a “fantastic day” and quipped that though he had also been working for the Japanese Foreign Ministry for 42 years he had never achieved anything like this. Mr Tsuruoka described Ichiba as “very accessible at a reasonable price” and imbued with “the spirit of Japan”. The pair along with partners then proceeded to hammer their way into a giant barrel of Gekkeikan sake: a ceremony known as a kagamibiraki, or mirror breaking.

Ichiba opened to the public on 14 July in a wave of free samples, taiko drumming and traditional Obon dance performances. Its opening follows the recent unveiling of Japan House London on High Street Kensington, which also promotes Japanese culture while selling a slightly more boutique range of products and has a high end sushi restaurant on site. 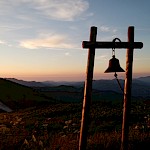