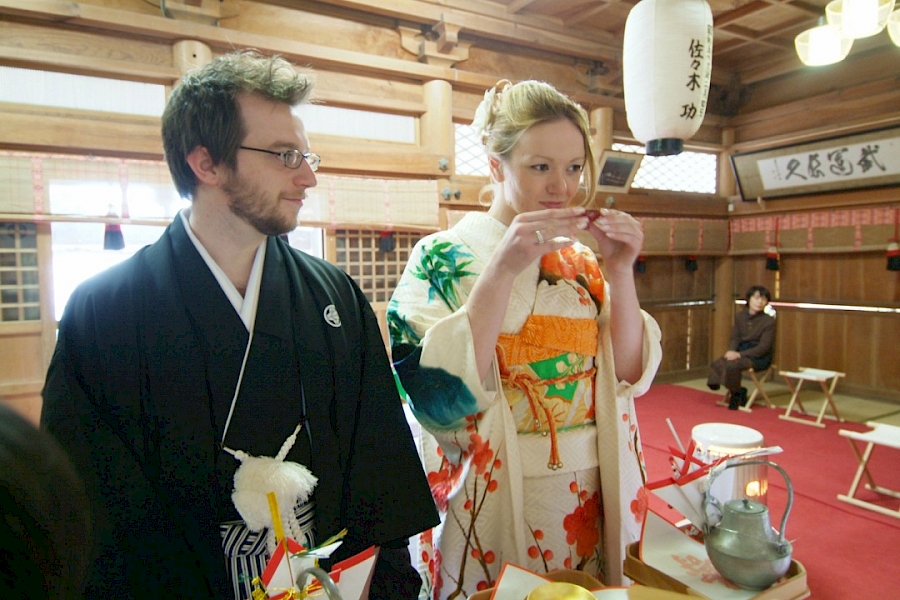 Gemma Treharne-Foose's three years in Shimane-Ken – first in Hirata and then Hamada – have had a major impact on her life: she realised a desire to 'sell Wales to the world' and, after working in PR for the Welsh government, a decade later she even named her marketing and communications business Ichibata after the train she took to visit her boyfriend, now husband.

JETLAG spoke to Gemma about being taken for a film expert, the call to return to Japan and the skill of enthusiasm.

1. What inspired you to join the JET Programme?

I was living in Cardiff after completing my traineeship in television research. I saw the JET Programme advertised in a Welsh newspaper and it called out to me – I suppose I was looking for an adventure! I had literally no association or link with Japan before that other than briefly studying Akira Kurosawa's film 'Rashomon' in an international film class on my undergraduate degree. Of course, when I arrived in Japan and mentioned this to one of my co-teachers, I was introduced as 'Gemma-san....who studied Japanese film at university and is an expert in Kurosawa...'. They meant well, though I was terrified I'd be asked about his other films!

2. How did you find your experiences as a JET?

I feel like a JET evangelist. I tell every graduate to consider applying – even if they don't want to teach afterwards. I loved my experience as a JET and I really cherish my time in Shimane-Ken. It was a life-changing experience for me as I met my (American) husband there – we married in our third year and have been together 14 years now (married for 11). I learned how to plan and organise events, enthuse people who perhaps don't want to be enthused and to overcome communication difficulties and challenges – so important in any workplace, and especially when you work in communications...or with politicians, like I have!

3. What have you been doing since finishing JET?

All that time in between lessons gives you plenty of time to study, research and think about your next step! I decided I was going to move into public relations, using my international experience. After coming across so many press officers when I was a researcher, I thought, 'I can do a much better job than these guys!' I applied for a scholarship to do a masters in Public Relations on the basis that I wanted to 'Sell Wales to the World' – I had to work really hard in Japan to get people to understand where/what 'Wales' was.

After receiving a full award to do a masters at Bournemouth University, I took a job back in Cardiff as a Government Press Officer. I worked for nine years doing a range of press, publicity and digital marketing roles in Welsh and UK Governments. Last summer I decided to take the leap to set up a business. I'm now a self-employed communications and copywriting specialist. I work with small businesses and established companies, supporting them with their social media, online engagement, PR and marketing needs. I called my business 'Ichibata' after the small train in Hirata, which used to take me to Matsue where I'd catch another train to go meet my boyfriend (now husband!). It kind of symbolised our coming together – and it all stemmed from our little weekend adventures in rural Japan!

4. How do you think your current role can further UK-Japan ties?

In my current role, there's not much call for links with Japan, but I've had some contact with the Kansai Welsh Society and people of Welsh descent in Tokyo. It's exciting for me to meet Japanese people in Wales and on my travels. I attend Cardiff's 'Japan Day' celebrations and also the 'Kotastu Animation Festival' in Cardiff. Recently I supported the 'Kizuna' exhibition in Cardiff's National Museum, which brought back a lot of fond memories. My daughter's at an age where she really understands and appreciates our little Japan-related excursions and she recently had her first kaitenzushi experience! Oh, and she loves to eat ramen – in our house slurping from the bowl is fine!

5. What are your professional and personal Japan-related goals?

Well I'm trying to convince my husband at the moment that I NEED to answer the call out for volunteers at the 2019 Olympics. I feel like I owe Japan a lot and would love to get involved in creating a great Olympics for Japan, though I think you have to be there 6-8 weeks, which is a long time to be away from your family, I suppose! My husband and I haven't been back since we left in 2007 and I have such a strong pull to Japan. I follow all the tourism and fan sites and feel a sense of belonging with Japan, though I'm (still) terrible at the language. It feels both wildly exciting and 'other' but also safe and familiar for me – I really want to share the experience with my daughter.

6. What did you learn or discover during JET that you've taken into life and career?

Know when to bite your tongue. Listen more than you talk (OK, I'm still struggling with this one!). Try everything that you are given at a restaurant or at someone's house even if you think it looks/smells awful. Remember how important it is for every team member to feel involved and do all you can to make people feel included and welcome. Finally, it's amazing what a smile can do! I know it sounds silly, but smiling really opens doors, makes people lower their guard and gets them to open up to you. My lovely English conversation class members told me when I left, 'I always felt like I could talk to you because you always smiled and I felt it was OK to make mistakes.'