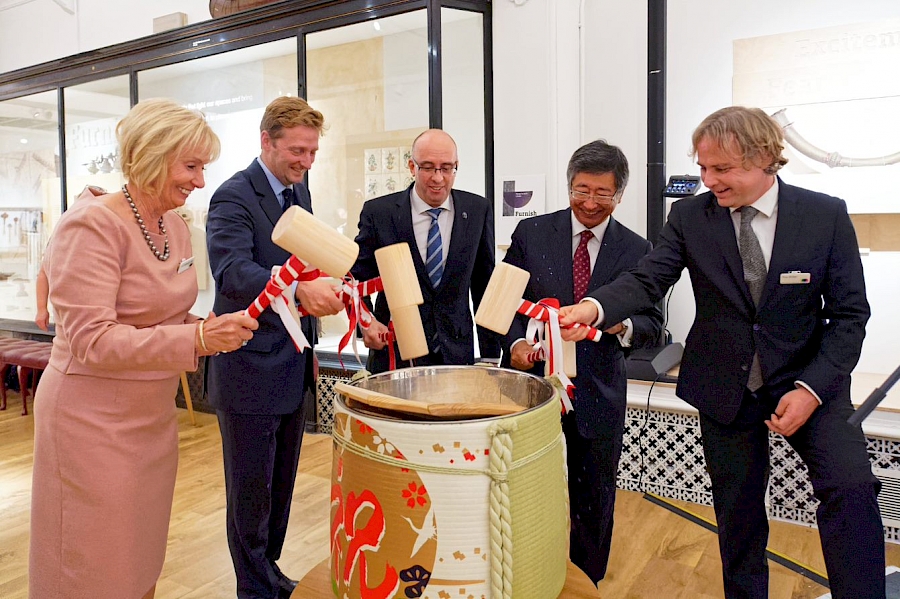 Ambassador Tsuruoka, the High Sheriff of Derbyshire, Lord Burlington, and Marvin Cooke, Managing Director of Toyota Manufacturing UK, launched the Derbyshire-Japan Season of Culture alongside numerous VIPs, including the Mayors and Youth Mayors of Derby and JETAA alumni.

Speakers outlined the importance of economic links, civic partnerships and cultural engagement to develop inclusive societies – which are among the themes of the Season of Culture in the region. Attendees were able to network while enjoying Japanese food and sake from Dojima Brewery in Cambridgeshire.

The event was organised and funded by JETAA in partnership with Derby Museum. It coincided with the launch of 'Ghosts and Demons' – a touring exhibition of striking Japanese prints from the Ashmolean Museum which have rarely been seen in public – and 'Powerful Nature' – an exhibition of Japanese watercolours, prints and exhibits from Derby Museum and Art Gallery.

There’s huge interest in all things Japanese in Derbyshire, and a 'Derbyshire-Japan Society' has been established as part of the Season of Culture – JET alumni in Derbyshire and the Midlands are very much welcome! Please e-mail ag@d-jsociety.co.uk if you’re interested.

There was special appreciation from speakers including the Ambassador for JETAA’s support for the event – the Ambassador, in particular, expressed his hope that Season of Culture events involving JET alumni would become a feature of the coming year.