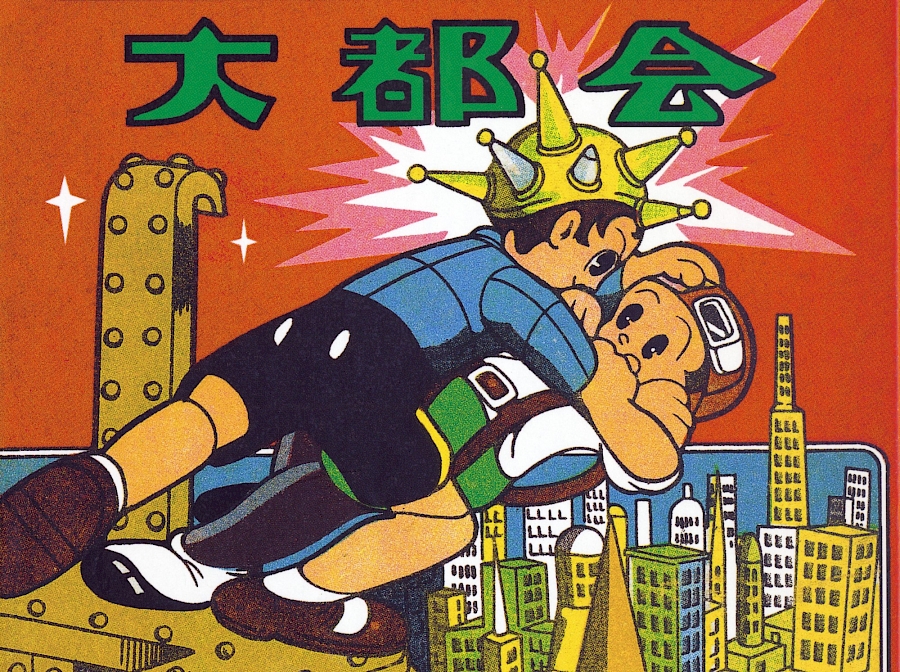 Staging an exhibition on manga, the Japanese tradition of comic books, is akin to staging an exhibition on American pop music: taken as a whole, the subject is so wide, so intertwined in its cultural context, who knows where you’d start? On top of that, while Pokemon and Dragonball may be fairly well known in the context of gaming and anime, unlike Elvis, Madonna and Beyoncé, few British people have heard of Astro Boy, One Piece or Attack on Titan.

That might be why the opening section of the British Museum’s exhibition Manga starts with the most basic question: how do you read the stuff? Shown is a kind of ‘grammar’ of manga, explaining how it’s read right to left, top to bottom, and exploring the array of symbols and marks connoting facial expressions, emotion, sound, movement. Many are intuitively familiar: they morphed into now ubiquitous emojis.

The realisation indicates how, even outside Japan, the medium has proved influential in some surprising ways. Manga – which as an industry is worth more than £3bn a year in Japan alone according to The All Japan Magazine and Book Publisher's and Editor's Association – is an increasingly global phenomenon. Already this year, for example, the live action adaption of Alita: Battle Angel, a 1990s manga series, has grossed more than $400m.

Still, the British Museum’s curators may feel some need to justify why it would stage an exhibition on comic books rather than, say, the Parthians. So nearby we are also shown manga’s posited roots in chōjū-giga, 12th century drawings of anthropomorphic rabbits and frogs done by monks: a tradition continued by the likes of Hokusai into the 19th century, these are the ‘pictures run riot’ said to be at the etymological root of the word manga itself.

From here we move into a more rounded history of the medium, which – along with an extraordinary kabuki theatre curtain on loan from Waseda University – is the exhibition’s most interesting section. Not coincidentally, it’s also where the show is actively telling us a story about its subject.

Connections are made with ukiyo-e, the exquisite, multi-coloured tradition of woodblock printing that was to influence Europe’s impressionists and post-impressionists. Like modern manga, this too was a mass print culture, where surprisingly a print could be bought for the same as about two bowls of noodles (a single volume of manga is around a bowl and a half in today’s men).

In turn, we see how comics in Japan sprung from a Western origin to become something definitely Japanese. After 200 or so years of self-imposed isolation, Japan was forcefully opened up by the Americans in the 1850s. After that western traders flocked in, some starting English language newspapers and satirical publications. Japan’s own paper printing culture grew out of this, with the first cartoons aping foreign styles.

That tradition gradually develops – becoming somewhat co-opted by imperial forces as propaganda – before ‘Godfather of manga’ Osamu Tezuka’s heavily Disney-influenced New Treasure Island was published in 1947, setting the standard and conventions on which modern manga has built. It’s clear that, even as manga and anime have become Japan’s greatest cultural exports after sushi, this medium has been a product of globalisation since day one.

A 17m wide, 4m high curtain loaned from Waseda University’s Theatre Museum astounds. Created in 1880 by Kawanabe Kyosai, painter, caricaturist and creator of what’s argued to be Japan’s first manga magazine, it is a sprawling tableau of leering ghosts, demons, sundry other-worldly creatures and calligraphy – intensely striking, even more so when you try to grasp that he painted it in four hours while drunk. The exhibition is not saying that this is manga. But from the heightened expressions to the overlapping, interwoven relation of the figures, there is a dynamism here out of which we can see the modern tradition of manga drawing emerges.

After taking in these landmarks of manga’s history, the bulk of the exhibition descends into something of a rollcall of manga’s many popular subjects since World War 2 – sports, horror, adventure etc – with drawings and pages from an array of manga on show. There is even a digital recreation of Tokyo’s oldest manga store, flanked by shelves of English-language manga, somewhat overcoming the issue that the exhibition is mostly prints and drawings while manga is something held in the hands and read. Towards the end we get some clips of Studio Ghibli films, the animation studio behind 2001’s landmark Spirited Away, presumably because internationally this represents the manga/anime world’s most major crossover. It feels a little glib.

A less comprehensive, more thematic approach could have elevated this exhibition. Countless interesting questions are hinted at: manga as a triumph of market segmentation; the connection between escapism and Japan’s culture of overwork; why adults read comics in Japan when they largely don’t in other rich countries; the commercial connection between manga, gaming and anime; even the intense editing process, where famous manga artists preside over workshops not unlike Renaissance artists’ studios, working with their editors to churn out popular manga for magazines; the legal and sexual questions which are relegated to the exhibition catalogue – why, for example, is Boys’ Love manga, focusing on adolescent male romances, so popular with teenage girls?

That said, this exhibition is a smorgasbord of interesting things to see, and I think this is even more the case for existing manga fans or those with a general interest in Japan. And if you wanted to read and look at everything, while the exhibition doesn’t feel huge, you could be lost in these worlds for hours. The curators too have pointed out that for younger generations manga’s image-driven nature is its central appeal.

But tackling a whole medium ‘in the round’ like this always risked becoming a survey, a visual list. Manga justifies its place in the British Museum as a cultural phenomenon. Beyond the very interesting history, the balance between displaying the variety of modern manga and tackling all the cultural questions which justify its inclusion here isn’t quite right. With a searing focus on fewer thematic questions, this exhibition could have provided more insight into this undoubtedly rich, sophisticated and fascinating medium and why it has become such a phenomenon.

Manga マンガ is on at the British Museum until 26 August. This is a popular exhibition, so booking is advised, especially on weekends. See more details here: https://www.britishmuseum.org/whats_on/exhibitions/manga.aspx

Please also see the offer below: 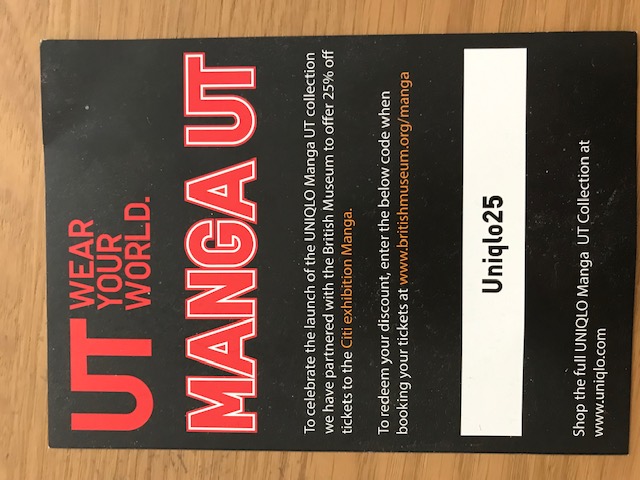