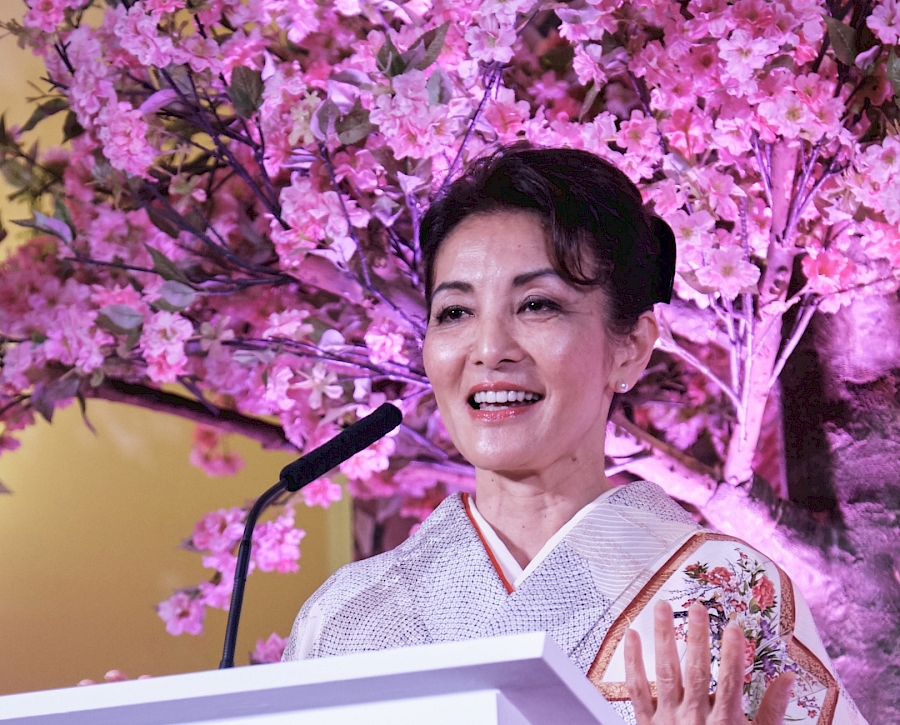 When Fukuoka native Rie Yoshitake came to London 33 years ago, it was with a hazy sense of a strong purpose.

"I don't know why exactly, but ever since I was young I was very interested in the overseas connection between Japan and other countries. Somehow, with age, I thought I would love to be a bridge between the UK and Japan. Of course, when I came here the intention was rather vague, because I didn't know what, how.."

Today, as the de facto face of sake in the United Kingdom and an exporter of fine wines to Japan, she is certainly a bridge between the two cultures.

While she'd been to America and Canada before, she was initially attracted to Britain's sense of history and tradition:

"The UK is a very traditional country, where everything comes with a history attached, very similar to Japan, and it's also an island."

Rie hails from the coastal Munakata region of Fukuoka, which she says is "very well known as the origin of foreign trade in Japan". She wonders if the desire to go abroad and bring a piece of another culture back home could be something in her DNA:

"It's almost like a bird: when the season comes, you get these feelings out of nowhere, and I just feel I have to fly."

In London Rie studied international marketing and public relations, before getting a job as the sole UK representative of a Japanese trading company, where she dealt primarily with fine wines – before this, though, she describes her knowledge of wine as limited to red and white! While after ten years the company sadly went bankrupt, she was able draw on the network of suppliers and wine merchants she'd built up to found her own company.

"An important thing I have to stress always: England is the capital of the world wine trade. Because England didn't [historically] produce its own wines, they always had to buy in. Whereas the French, for example, are very prejudiced in a way. They are always protecting their own wines.”

She additionally founded Yoshitake & Associates, a consultancy focusing on business links between the UK and Japan.  At the same time as going into business herself, she also began promoting sake overseas. As she explains:

"Sake was declining badly, so I was asked to help, to put Japanese sake into the wine market."

Spreading the word about sake

In 2007, Rie was invited to become the UK representative of Sake Samurai, which represents the Japan Sake Brewers Association abroad. She was instrumental in sake's inclusion since 2007 in the International Wine Challenge – the world's premier wine competition, and now also the biggest sake competition outside Japan, generating significant publicity.

For Rie, this advocacy and promotional work is mostly voluntary, but she explains its importance: "This is my life work, my mission. It's something I love to do."

She sees nihonshu as more than just Japan's national drink:

"What I'm most interested about with sake is, more than a drink, it's an incredible ambassador. Sake was originally made to [build] the harmony of society. That beauty is still living.

"By drinking sake together, somehow it brings the hearts of people together. It's almost like a mystery but it does work."

The sake and washoku boom

Sake exports from Japan have roughly tripled since 2006, according to Rie, "almost too fast" for an industry that can be conservative and slow to change. Rie attributes part of this growth to the surging popularity of Japanese food, as Japanese restaurants are still where Europeans are overwhelmingly likely to try and drink sake. And while Rie laments that "sake is still being misunderstood by everybody" – from its strength to whether it can only be drunk warm or only goes with Japanese food – these preconceptions are starting to break down.

She puts Japanese food's increasing popularity, and with it sake’s, down to several factors. One is that it's generally viewed as healthy. Another is that, with its focus on quality of ingredients and refined technique, Japanese cuisine naturally lends itself to high-end dining, which in turn influences the wider scene. Internationally-minded younger generations are also more willing to try new things, particularly from a country like Japan with a generally positive image and intriguing culture.

In terms of the ultimate potential of Japanese food and drinks Rie compares it to coffee shops, while tempering expectations:

"When I came here thirty years ago I couldn't find a coffee shop. Now coffee shops are everywhere. But even with that, it takes ages in this country [the UK] to change food culture."

After three decades in the UK, and given her line of work, Rie is a prominent member of the Japanese community. This looks rather different today than in the late 1980s, when she says it was much bigger (before the 'bubble' popped) and almost "bureaucratic" in nature, and she preferred to stay more independent:

"When I first came here as a student, and then as the sole representative of a company, I had no reason to be a part of Japanese society in this country, and I kind of avoided it. Especially for women, you were always somebody's wife. You were often pigeonholed."

However, particularly as she has worked more on sake, she has formed more connections to London's Japanese community, and says, at times, "The funny thing is I feel like I'm living in Japan! Once you get into it, it can be very close."

One thing she likes about this situation is that Japanese people living in London, whether in corporate or diplomatic settings, are overall a talented and interesting group:

"Sake actually helped a lot to become a part of the Japanese community. I like the Japanese community here very much, because the ones who I'm dealing with are incredibly talented people from Japan. I can say, quite confidently, there is no city like London for meeting interesting Japanese people. Here are the people who will be leading Japan [in the future] and bridging between Japan and overseas."

Reflecting on life in the UK

While Rie still returns regularly to Japan, the UK is now home. Pressed on whether she doesn't like anything about the UK, she says life here is sometimes a bit more slapdash, a little less punctual, from late couriers to bathrooms renovation that are meant to take two months and last a year. But ultimately she praises its generosity of spirit:

"In the UK I feel much freer and I can find myself, because that's how the UK treats everyone I think. The UK can bring people together while respecting their national identity. As long as you do the right thing, you are kind of allowed to do your own thing."

She reflects on the original impulse that brought her here and how it's evolved:

"Being in the UK I want to do something for my own country. The strange thing is it's not just one way: I want to return to Japan by enjoying living in the United Kingdom."

In the business of connecting cultures, and sharting the drinks often found at the heart of social life, Rie Yoshitake has been at the forefront, fulfilling that vague but strong purpose she came over with 30 years ago.