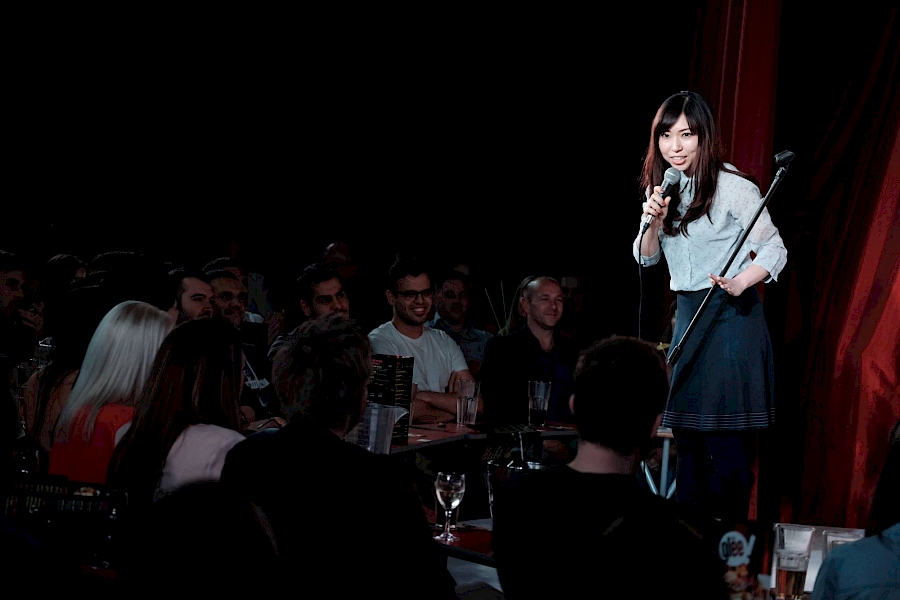 Yuriko Kotani: the Japanese comedian rising up the ranks of UK stand up

After ten years living in the UK, in 2014 Yuriko Kotani decided to try stand up. For most, the idea of doing stand up is unthinkable, let alone in a second language. When I asked the Japanese comedian how that first time felt, performing in English, she says, "It was absolutely terrifying."

"I hated it. I thought I'll do it and then no one will know – like it never happened. But then I tried a second time. I got laughs all the way through. It was at an open mic gig. And then I cried on my way home. I was happy: happy tears. Since then I've just kept going."

It didn't take long for Yuriko to make her breakthrough, winning the BBC's New Comedy Award in 2015. And now, after featuring in BBC Three's hilarious YouTuber mockumentary Pls Like, as well as on Radio 4, Radio 3 and BBC World Service, she's on the eve of her debut show at the Edinburgh Festival Fringe: Somo Somo.

Believe it or not, becoming a rising star in the British stand up scene was not Yuriko's plan when she moved to the UK in 2004. "There are so many reasons," Yuriko, originally from Aichi Prefecture, explains. "But I guess the main reason was I was in love with a guy from the UK. He'd been a study abroad student."

Upon quitting her job at a Japanese company, Yuriko says, "I thought, what do I do now? This person was going to go back to the UK, so at that moment I thought to myself maybe I'll just meet his family and friends and have a visit. But then I fell in love with Britain."

"I just became a fan, so I watched many other British comedy shows like The Mighty Boosh or Black Books or Green Wing. At some point I told myself maybe I'd like to write comedy in English. I thought it would be a really fun thing to do." After working a string of jobs mostly in admin for a decade, she hasn't looked back since.

Yuriko says one of the highlights has been when a clip from a Russell Howard-hosted show on Comedy Central went viral, reaching the top of Reddit. The central joke riffs on the British love of the idea of 'ish', and how this badly fails to translate when organising a meeting time with her Japanese mother-in-law. It's a great example of, as Yuriko sees it, the advantage of being a 'foreign' comedian, simultaneously inside and outside a culture:

"I think one important thing for comics to have is observation: to observe things and point them out. Especially when I arrived in the UK there were so many things that were different from Japan. So, I guess I could see the differences, and then talk about them. And also now because I've been here nearly 15 years, when I go to Japan I can do the same thing. It's super fun."

Yuriko's style can bring a level of deadpan and dryness that puts British comedians to shame. After the clip blew up, she says:

"So many people told me I have a deadpan expression. But I didn't know what deadpan meant! I looked in a dictionary. I thought I was smiling! And then I watched the video of myself and thought, yeah I look deadpan or angry. Right now, I have no idea what kind of face I'm doing [on stage]. I think I'm smiling!"

As for performing in English, though she sometimes still feels nervous, she says, "At the same time I stopped trying to make things perfect. On stage there's a magic that if I say something wrong sometimes it becomes comedy. So now I'm embracing it."

A formative moment was the final of the BBC New Comedy Awards which included a live broadcast on BBC Radio 2. "It was huge and it was live!" Yuriko says. "I was so worried because I'm not from here and also I've got an accent." When she won she took it as a sign that, to an extent anyway, the UK is an "open-minded and inclusive" country.

Somo Somo's primary themes include racism, sexism and love, as well as discussion of Yuriko's coming to terms with that infamous Japanese proverb, 'The nail that sticks out gets hammered down' (deru kugi ha utareru). For her this means:

"So if you do something different or unique people might not like it. So the show is about me; it's my journey through learning and experiencing cultural differences. And how I finally found my own voice and embraced my individuality."

While called a debut show in the industry, Somo Somo is far from Yuriko's first appearance at Edinburgh – having followed shorter slots with 40 minute shows in 2017 and last year – but it is her first full hour. With this as springboard she talks about wanting to try as many different comedy platforms as possible, including doing more writing and improv, and simply to become a better comedian. Now that when she returns to Japan she sees it with fresh eyes, she's also interested in doing stand up in Japanese, asking, "Yes, why not? Again, you never know where life will take you!"

"Somo somo in Japanese means to begin with or in the first place," Yuriko says. "So, I thought it's a great way to sum up my show right now: it's the beginning."

She adds drily: "And also apparently it's the name of a paradise-like place in Fiji. I didn't know that: my show is nothing to do with this paradise island. So hopefully no one will come to my show and expect I'm going to talk about Fiji."

Yuriko Kotani will be in Somo Somo at the Edinburgh Festival Fringe from 31 July-26 August. Get more info and tickets here: tickets.edfringe.com/whats-on/yuriko-kotani-somosomo