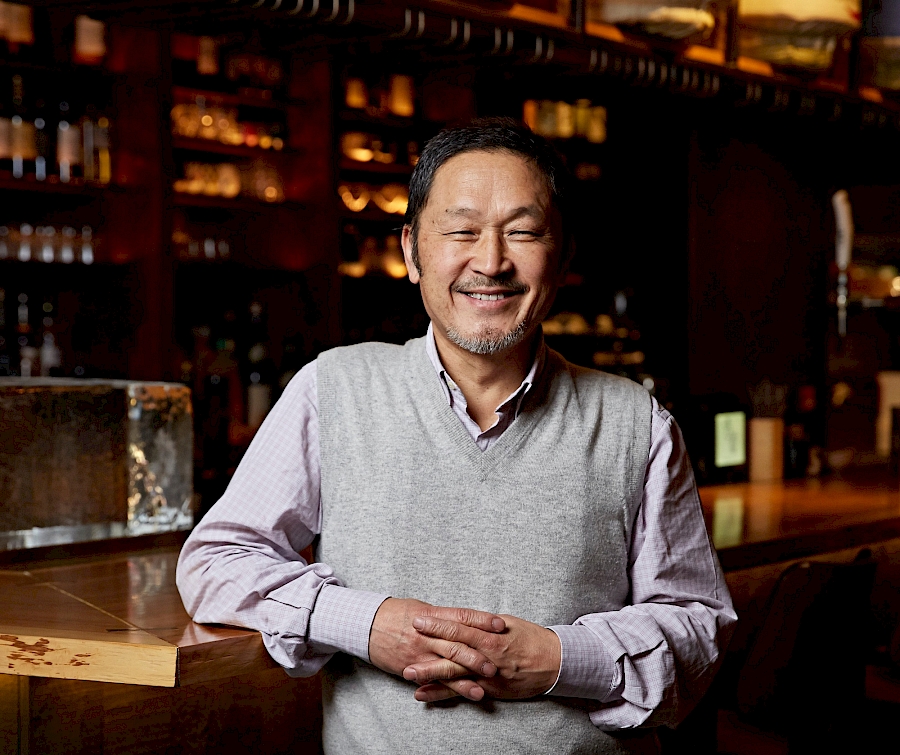 Tak Tokumine is probably the most famous Japanese entrepreneur in Britain. As the man behind Japan Centre, the food hall and retailer just off Leicester Square, he’s helped to popularise authentic Japanese ingredients among a wider audience at the same time as Japanese restaurants – including some of his own – have boomed in popularity.

It’s a vision that has evolved since he moved to the UK in 1975. His British wife suggested one Sunday he go out and find a good Japanese book to read. A fruitless hunt across London became an idea for a bookshop for Japanese expats, the first iteration of which opened in 1976. A passion for food saw this venture expand into groceries before Tak opened his first restaurant in 1980. There were several more evolutions, and some opened and closed ventures, but ultimately it’s Japanese food and wares done in the right format that has unlocked a wider audience. In 2020, a thriving Japan Centre sits at the centre of what’s become a Tokumine family business empire.

In 2012, Tak opened Shoryu Ramen, a now nine-shop-strong chain specialising in tonkotsu ramen. He is also the driving force behind Ichiba, a larger food court and retailer in Westfield Shepherd’s Bush. There is also another Japan Centre concession in Westfield Stratford as well as an online store. This stable of shops and restaurants is rounded out by Sakagura, a smart Mayfair restaurant which has a wide menu but specialises in steak, and as of January 2020 another new venture: a Showa-style retro ramen bar above Japan Centre. Unlike Shoryu, which vegetarian options aside has religiously focused on tonkotsu (using a stock made with pork bones), the new joint specialises in soy and miso ramen.

JETAA UK spoke to Tak about how he, and his business, ended up where it did today and lessons learned from a life made in the UK.

I've read you first came to London in 1975 after meeting an English girl in Hong Kong. How did you feel at that time and what were you plans?

Tak Tokumine: At that time, many Japanese journalists were writing about Britain negatively, because the UK’s economy was in decline. And one of the reasons that view came about was because the Japanese economy was growing so quickly.

My plan was initially just to visit Susan, my girlfriend at the time, in the Peak District where she was from. But after meeting her family, I started to think seriously about getting married and moving to the UK. But I never thought we’d live here for such a long time, until three years later when I made up my mind to commit to my work in the UK.

Was there a large Japanese community in London when you moved here? How has it grown or changed?

TT: Back in 1975, London’s Japanese community was only 8,000 people. It increased in number during the 1980s, during the Japanese economic bubble. That really kick-started Japanese people coming to the UK.

I'm sure that Japanese culture, and particularly food, has a much larger presence in the UK now than then. Why do you think that is? What has been key?

TT: Food is the gateway to understanding different cultures. But I started a Japanese bookshop as my first business – small but steady.

I think there were two things that were key in spreading interest in Japan in the UK. First, Wagamama and Yo sushi spread affordable Japanese food. And second, the JET Programme brought British teachers and their families to Japan. These people started telling everyone else about Japan and Japanese culture.

What do you think has been the most important innovation at Japan Centre and your other businesses?

TT: I focused on retail, but in a business model where there is a mixed focus on retail and a restaurant, an idea similar to Eataly from Italy. But it all started with that very small book shop, and built up over time.

I started to shift our direction into the food business when the bubble economy burst, and many Japanese people started going back to Japan since their companies decided to shut down their branch offices in London.

At the same time, as I said, Japanese food had steadily become more popular thanks to Wagamama, Yo Sushi, Itsu, Wasabi. Frankly, they are 'not my cup of tea' but have made Japanese food more accessible, with high street locations and broad menus helping to increase awareness of Japanese food across the country.

You’ve continued to expand your business. Especially though the ramen chain Shoryu and, in partnership with some others, Ichiba in Westfield, which is Europe’s largest Japanese food hall. Firstly, why did you want to open Ichiba?

TT: I wanted to create a new presentation of the services we offer but with more variety. I thought with the size of something this big, it’s something that other people could not start easily. With my deep knowledge of food and contacts, I kept fixating on launching something like this.

Shoryu was one of first ramen chains specialising in tonkotsu ramen, which is the speciality of your hometown, Fukuoka (aka Hakata). Why is tonkotsu the most popular style of ramen in the UK?

TT: British people are basically a pork-eating people. And they love to experiment and experience new menus, as well as new restaurant concepts and food trends. Noodles were popular already here in the UK due to the popularity of Chinese noodles and Italian spaghetti before we started selling Hakata ramen. In that sense, it’s a natural fit with the British palette.

The Japan Centre group is very much a family affair. Your daughter, son and niece are involved, and your brother has been too. Any thoughts of retirement and how do you see the future of the business going forward?

TT: All I can say is I'll do my best to keep fit at the top until I've found a successor!

TT: I like the UK’s large green parks and free motorways. I am not a big fan of Brexit, which has caused disruption amongst many sectors including hospitality and retail.