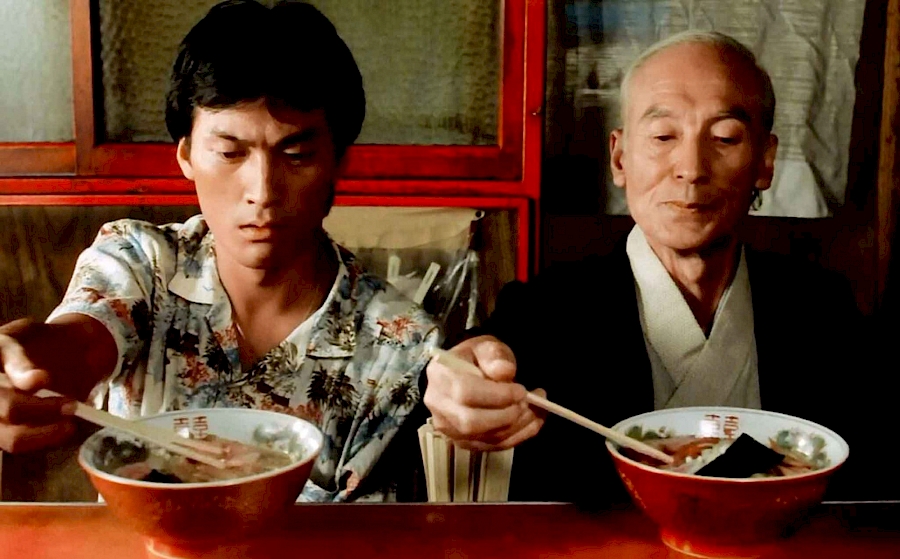 In the 1985 cult film Tampopo, one of the main characters goes for a meal with a ramen master who’s “studied noodles for 40 years”. Two steaming bowls are placed before them. The younger grabs his. He is about to dive in, before he turns to ask the still motionless old man, “Sensei, soup or noodles first?” The master turns slowly, replies deliberately, “First observe the whole bowl.”

Ramen: is it an art? A science? Somewhere in between? It’s certainly harder to come by in the UK than in Japan, where a potentially life-changing bowl awaits down your average back alley for the equivalent of a fiver.

But things are changing. While ramen perhaps first seeped into national consciousness through the uninspiring Wagamama version, more and more specialist joints are opening up around the country. Some, such as Kanada-ya and Ippudo, are even expansions from Japan. Curiously, tonkotsu (pork bone) stocks native to Kyushu seem to hold sway in the current UK ramen scene. In pleasing contrast to Japan, vegetarian options are usually available.

We review four of the most popular options here:

Apologies that only two of these chains have outlets outside London (in Birmingham, Oxford and Manchester). If you know of a great ramen joint in your area please consider writing a review, and help us to create a comprehensive and nationwide resource.

Bone Daddies
The pitch: Rock ‘n’ roll ramen and Japanese soul food
Review: Unlike most UK ramen chains Bone Daddies is content not to play on its authenticity. Options like Harissa Lamb Ramen show its willingness to experiment and a range of izakaya-style sides, steamed buns and rice bowls are also on offer. The tantanmen wasn’t far wide of the mark, with a formidable whack of sesame, although the potent red broth of the Pork Pork Chili was actually closer to what I would have expected, topped with charred pork belly as well as pork mince. The Yuzu Tonkotsu was fragrant although the citrus flavour was actually quite subtle to taste, derived from yuzukosho (yuzu pepper) – incorporating fresh yuzu could have added a potentially very interesting twist. Mushroom broth is the backbone of multiple vegetarian options including tofu curry and veggie tantanmen.
Point of note: Bone Daddies really differentiates itself when it comes to toppings including mushrooms, kale and trademarked ‘cock scratchings’
Cost: £12 per head for ramen only
Locations: 6 ramen joints across London + two Japanese soul food-style restaurants
Website: bonedaddies.com/restaurants/

Kanada-ya
The pitch: Authentic tonkotsu ramen from Fukuoka
Review: Kanada-ya is already a word-of-mouth favourite among Londoners. A huge plus point is that it actually asks customers how hard they would like their noodles – sadly not common practice in the UK. Especially good news when the noodles are this good. The Tonkotsu X ramen (‘exclusive to London’) is made with a pork and corn-fed chicken bone broth. This had a strong, clear flavour although part of me wished I’d opted to sample the intensity of the pure tonkotsu option. The chashu also lacked a little oomph. While Japanese phrases flew from semi-convincingly from the kitchen, the kaedama option (another helping of freshly-cooked noodles for your remaining broth) comes straight from Kyushu and is another authentic touch. The vegetarian option here has an intriguing porcini and soy milk base, topped with asparagus. Sides like onigiri, edamame and chicken karaage – which was good but not exceptional – are also on offer.
Point of note: Kanada-san is a former professional Keirin racer and the restaurants have a fascinating backstory straight out of a film
Cost: £15 per head for ramen plus kaedama and shared side of karaage.
Locations: Stores in Piccadilly, Covent Garden and newly opened in Angel
Website: kanada-ya.com

Shoryu ramen
The pitch: Hakata ramen from the team behind Japan Centre
Review: With a head chef and owner both from Fukuoka, tonkotsu is the only base available here other than soy milk. I opted for the Kotteri Hakata Ramen which promised an extra meaty flavour, and was given the option to choose the hardness of my noodles. With kikurage (wood ear) mushrooms, spring onion, pickled ginger, nori and Shoryu’s ‘signature’ addition fried shallots all coming as standard as well as egg and chashu, it was quite a busy bowl! The shallots added an interesting frisson. Though there were only two slices of chashu they were of unusual thickness, and actually quite lean. Gyoza came sizzling from the kitchen in a skillet and were positively plump with pork – great with a delicious dipping sauce shot through with vinegar. Two vegetarian options use the soy milk base, in addition to Curry Ramen and Miso Wafu Chicken. Though the toppings did dominate a bit, overall a delicious bowl of ramen with a strongly savoury broth.
Point of note: The Soho outlet has the largest selection of sake, shochu and umeshu in the UK, with over 130 to choose from
Cost: £20 per person for upgraded ramen and 6 gyoza each
Locations: 8 locations across London + one in Manchester and one in Oxford
Website: shoryuramen.com

Tonkotsu
The pitch: Classic tonkotsu ramen “enriched with lardo”
Review: Though Tonkotsu’s menu is emblazoned with the words “If you don’t make your own noodles, you’re just a soup shop”, the broth of its signature Tonkotsu Ramen is what really stands out here. Almost too thick – and perhaps it is the lardo – it was too rich to finish, too delicious to leave, with the seasoned egg also a standout. If there was a criticism, even with an extra helping of noodles, the portion was not gigantic. Gyoza, the traditional side dish with ramen, are pleasingly prominent on the stripped-back menu and were quite good. A curried pumpkin and spiced corn ramen is on offer for veggies.
Point of note: Cold ‘Hiyashi Ramen Salads’ are also available, including options with duck, chicken, and shiitake and shimeji mushrooms
Cost: £20 per head for ramen, alcoholic drink each and shared gyoza
Locations: 8 locations across London and in the Selfridges Foodhall in Birmingham
Website: tonkotsu.co.uk/page/contact