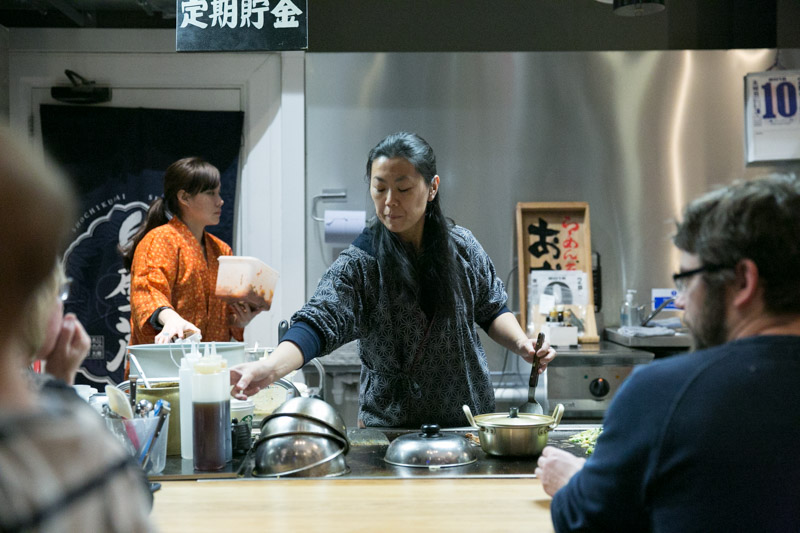 To learn how to submit restaurant reviews to JETAA UK yourself – and stand a chance of winning a £25 Japan Centre voucher – please see this guide.

The pitch: Delicious Okonomiyaki a stone's throw from the London Eye

Review: Okan's location and decor all give it the impression of being a hidden gem. Not easy to stumble across, it's tucked into London's giant former County Hall, the other side from the river and London Eye. My fears that it was closed on Mondays (from checking the website on route) were quickly assuaged when several Japanese businessmen strolled confidently through the curtain. We duly followed. Its plain interior is a mixture of benches and counter seating, decorated by poppy Showa era-style signs and posters. Aside from a couple of sides – the pork gyoza and kimchi both proved tasty – the menu is entirely made up of Kansai-style Okonomiyaki, as well as Yakisoba and Yakiudon. The owners, who hail from Osaka, started serving Okonomiyaki from a Brick Lane food stall in 2002. The teppan holds pride of place and part of the fun at Okan is watching not just everything being made in front of you but seeing the entire workings of the kitchen. My friend opted for the special okonomiyaki – prawn, kimchi, squid and sweetcorn – while I went for pork and noodle. Both reasonably priced at around £10, one of the joys of okonomiyaki, compared certainly to London's many ramen restaurants, is that no one has ever managed to make a version that is either trendy or anything less than filling for the price. The sweet bite of the okonomiyaki sauce, dancing katsuobushi and really everything about Okan feels and tastes satisfyingly authentic. Though I would have liked my noodles a little crunchier, not much more can be said about our okonomiyaki other than that it was totally delicious. With friendly service to boot, I'll certainly be returning – my only fear that the okonomiyaki was so good I'll never get round to trying to yakisoba!

Point of note: Okan is located in County Hall – home of London's government until 1986, now owned by a Japanese company. An izakaya, Hannah, is in same the building and a beloved ramen joint called Sasuke recently closed next door, reportedly to make way for a sushi restaurant.

Cost: ~£25 per head, for okonomiyaki, one side gyoza, one side kimchi and two pints of Kirin each